When I started out in qual research 25 years ago the desired skill set was fairly well established. You had to know how to interview someone, to moderate group discussions, and to use a range of projective / enabling techniques to get beyond the rational responses you often got. Most other skills were peripheral, for certain specialisations, or things you might have used to ‘add value’ to a proposal. They weren’t core.

How times have changed…

In the time I’ve been in this game, not only has technology enabled us to do more, but the assumptions that underpin what is considered best practice qual have been challenged. And that means the desired skill set has had to change as well.

What do I mean? The diagram below (courtesy of Chris Arning at Creative Semiotics) helps explain. 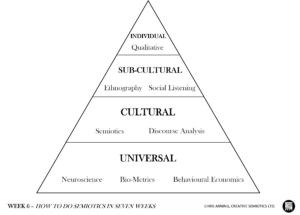 For so long, the assumption underpinning qual research was that to understand and influence behaviour we needed to primarily understand an individual’s thoughts, feelings, values, and attitudes – as these internal ‘motivators’ were the main drivers of behaviour.

So qual research was focused on the top of the pyramid – the individual. And the core skills (depth interviews, group discussions, ‘projectives’), adapted from psychoanalysis, focused on the internal, the personal, and were largely  ‘q & a’ based.

We often ignored, or treated as an afterthought, the behaviour itself and the context in which it happened. And even when we did pay attention to these, they were often covered off by asking people about their past and future behaviour, out of context, or by interviewing them in their home and calling it ‘ethnography’.

But the rise of behavioural sciences has challenged the fundamental assumption underpinning qual. We now know that action changes attitude faster than attitude changes behaviour. That behaviour trumps attitude most of the time. That context is critical to explaining behaviour.

And that means that in qual research we have often over-emphasised the importance of the individual, at the expense of the contextual.

So, if we want to influence behaviour, we need to understand it in context – both the situational context, as well as the broader (sub-)cultural context. We need to move down the pyramid.

The upshot of this? It seems to me a good qual researcher needs to be so much more than a great interviewer/moderator. We really need to know how to do ethnography and semiotics (properly!). We need to be cultural and behavioural analysts. We need to be more multi-talented than ever before.

What a great time to be a qualie!